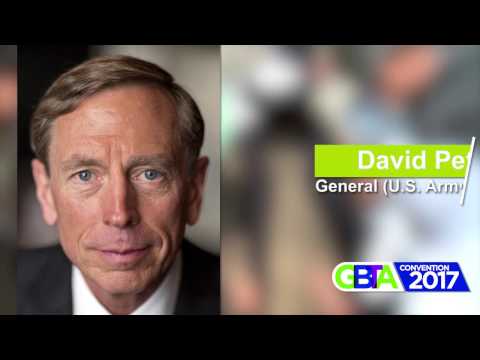 General Petraeus is one of the most prominent U.S. military figures of the post-9/11 era. During his 37-year career in the U.S. Army, he was widely recognized for his leadership of the Surge in Iraq, which retrieved a desperate situation and reduced violence in Iraq by over 85 percent.

After General Petraeus’ retirement from the military, and following confirmation by the Senate by a vote of 94-0, he served as Director of the CIA, during which time the Agency played the central role in a number of important achievements in the global war on terror, established an overarching strategic campaign plan for the Agency, and pursued initiatives to invest additional resources in the Agency’s most important element, its human capital.

Held at the Boston Convention and Exhibition Center, GBTA Convention 2017 will bring together nearly 7,000 business travel professionals from more than 50 countries across the globe. It will feature world-class keynote speakers, more than 80 industry-leading education sessions, the largest business travel expo floor, a wide selection of professional development opportunities and much more, providing attendees the opportunity for professional development and to get business done.

Attendee registration is open now. Register by April 25, 2017 to receive up to $300 in savings. More info on programs and speakers will be unveiled throughout 2017. For the latest developments and more information, please visit gbta.org/convention.

Media registration is complimentary and available online. GBTA’s third annual Media Day on July 16, 2017, will feature back-to-back news announcements throughout the morning from top travel companies around the world, giving media an exclusive pass to the latest travel industry news.