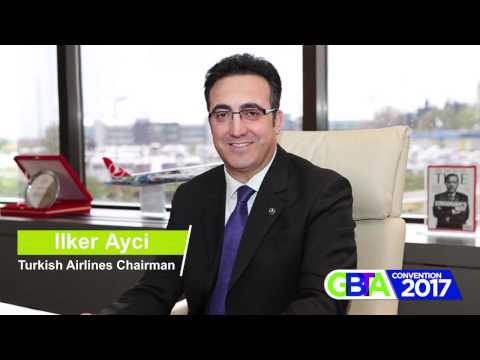 Ilker Ayci was named Chairman of the Board and the Executive Committee of Turkish Airlines Inc. in 2015. Honored by Skytrax as Europe’s Best Airline for six-years running now, Turkish Airlines is Turkey’s flagship carrier flying to over 290 cities in 116 countries.

Ayci previously served as the Vice President and President of the World Association of Investment Agencies between 2013 -2015 and the President of The Investment, Support and Promotion Agency of Turkey between 2011-2015. He holds numerous board positions at organizations such as the Insurance and Re-insurance Association of Turkey, the Turkish-Chinese Business Council in Foreign Economic Relations Board, Vakıf Emeklilik A.Ş, Güneş Sigorta Sports Club (2008 European Challenge Cup champions) and the Turkish Airlines Sports Club.

Held at the Boston Convention and Exhibition Center, GBTA Convention 2017 will bring together nearly 7,000 business travel professionals from more than 50 countries across the globe. It will feature world-class keynote speakers, more than 80 industry-leading education sessions, the largest business travel expo floor, a wide selection of professional development opportunities and much more, providing attendees the opportunity for professional development and to get business done.

Attendee registration is open now. Register by March 7, 2017 to receive up to $500 in savings. More info on programs and speakers will be unveiled throughout 2017. For the latest developments and more information, please visit gbta.org/convention.

Media registration is complimentary and available online. GBTA’s third annual Media Day on July 16, 2017, will feature back-to-back news announcements throughout the morning from top travel companies around the world, giving media an exclusive pass to the latest travel industry news.