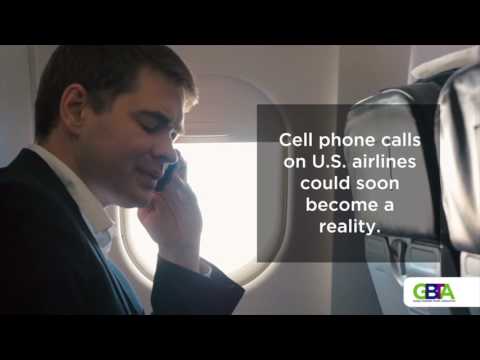 When it comes to cell phone calls on planes, GBTA believes silence is golden. As the late Pete Seeger, a champion of folk music and social change, said, there is a time to speak out and a time to keep silent. Under its authority to ban unfair practices, the U.S. Department of Transportation (DOT) should choose the latter approach and ban mobile wireless voice calls during flight on aircraft.

Allowing passengers to make cell phone calls on planes presents a security threat as well as the potential for disruption and a loss of productivity. A large majority – 64 percent – of business travelers in the U.S. oppose allowing passengers to talk on their phones while in flight. Additionally, more than half (51 percent) disapprove, even if airlines designated specific rows where in-flight phone calls would be allowed.

On Monday, GBTA submitted comments to the DOT on their Notice of Proposed Rulemaking (NPRM) for Use of Mobile Wireless Devices for Voice Calls on Aircraft urging the Department to use its authority to ban the use of calls while in the air. GBTA supports a cell phone ban for reasons of traveler convenience as well as security.

What can you do?

Tell the DOT to Ban Cell Phone Calls on Planes
Individuals can submit their own comments to the DOT and it’s an incredibly easy process. Visit the DOT website here. Enter your comment telling the DOT why you think cell phone calls should be banned on planes. You can copy and paste the text below or write your own. Then just enter your name, select “Public Comment(s)” from the dropdown menu under “Category” and click continue.

Pursuant to 49 U.S.C. 41712, DOT should find the use of mobile devices for voice during flight to be so disruptive that it would be inconsistent with adequate air transportation. Travel is difficult enough and the DOT should not add to traveler’s misery. When it comes to flying on commercial airplanes in the United States, silence is golden.

Make Your Voice Heard on Social Media
Share a selfie over your social media channels. Tell us why you don’t want cell phone calls allowed on planes, use #NoCallsOnPlanes and tag GBTA on Facebook or Twitter.